Meet Melanie, Janeen and a couple of poodles! 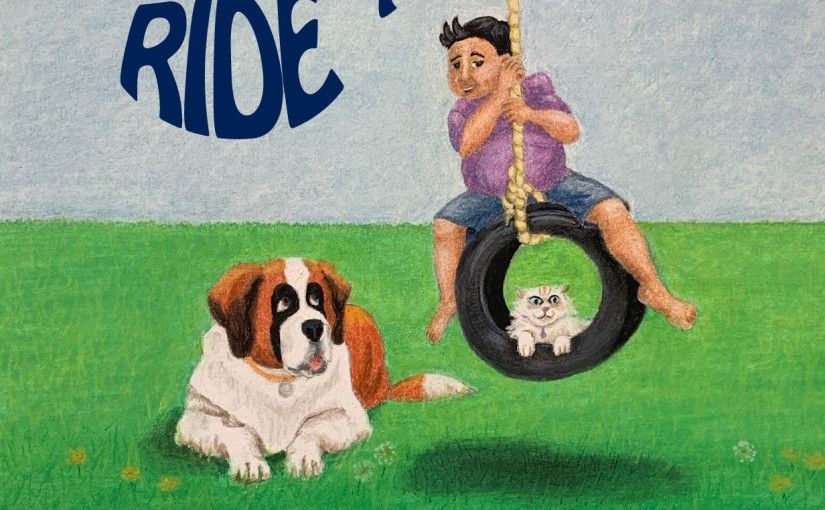 Illustrator Carey Lancaster and I have been caught up in a whirlwind of activity since the release of our chapter book Elsewhereville!

The trailer, expertly done by William Jamison and Cranberry Jade services, was a draw and sucess, attracting interest in Canada and the UK, and the book has been featured across the United States in inclusion and diversity workshops.

We have been attending signings, festivals and art shows and meeting and connecting with readers and fans across the Tri-state area. Elsewhereville even got up to #2 in two categories on Amazon during a recent promotion! We so hoped for #1, but maybe another time. Elsewhereville is even up for two awards in children’s fantasy fiction!

So many people have reached out to tell me that they or their child identify with the main character, Myrtle Hitchabocker. A few people even told me they shed some tears over the book. What an honor to connect with readers in that way!

I think the draw is that we all want to be accepted for who we are without judgement, and in Elsewhereville it’s automatic. There’s room for everybody.

I’m looking forward to many more books to come with “You Can’t Ride a Cat” releasing in July and an Elsewhereville activity book releasing in time for Christmas. I also have a manga-inspired book, “Alligator’s Baby Teeth” coming soon.

If you are interested in purchasing any of my autographed books signed to you or a loved one, please follow this link: https://www.facebook.com/melaniejvogel.author/shop/?ref_code=mini_shop_profile_plus_shop_tab_cta&ref_surface=profile

I’ve read it took J. R. R. Tolkien about 17 years, from start to finish, to publish The Lord of The Rings. While Elsewhereville is no middle earth, just knowing it took one of the greatest writers that long to finish his book makes me feel a lot better about spending 14 years perfecting mine, Elsewhereville, my new portal fantasy children’s chapter book for ages 7-12.

It’s just that I realized Myrtle Hitchabocker , Elsewhereville’s protagonist, had more to say than the characters in my usual picture books.

Anyone who knows me personally will see that I tucked a little of myself into Myrtle. As a child I struggled with wanting to fit in. I was a head taller than most of my classmates and “chunky”. Back then Sears and Roebuck politely called it “Pretty Plus” (as if we were pretty and then some).

There were other things that separated me from others including the fact that I was a day dreamer, constantly imagining outlandish escapades or just downright silly stuff.

If it wasn’t for my constant day dreaming I don’t think I’d be the person I am today, and I certainly wouldn’t be a children’s book writer.

So let’s teach our children to celebrate their differences and honor the “other”. We really are all beautiful.

If you are interested in preordering an author-and-illustrator-signed copy of Elsewhereville please contact me at Melaniejvogel@yahoo.com to set up arrangements.

To check out and/or shop for my other children’s books, please visit my Facebook page at https://m.facebook.com/melaniejvogel.author.

After the success of my self published book Too Many Poodles in 2019, illustrator Dave Howard (aka Uncle Dave from Uncledavesbooks.com) and I went to work co-writing a book titled Green Pickle Juice for the popular Pittsburgh, Pa festival “Picklesburgh”. We released it with relish 😉 in October of 2019.

We were all set to attend the 2020 Picklesburgh festivities, and I was ready to launch my first children’s chapter book, Elsewhereville, in late spring of 2020 with an endless schedule of book signings and events planned for that summer…

BUT to quote poet Robert Burns, “In proving forsight may be vain: The best laid schemes o’ Mice an’ Men”…We all know how that goes.

Instead I found myself turning into a full time gardener for two months and too overwhelmed to write a word for many more. I have lain low, lain down, lain waste and in that lull I’ve found some unexpected strength which, as any good author might do, I’ve passed on to my female protagonists when I did find myself writing again.

In the in between I didn’t so much find new strength as discover hidden strength I’ve had all along. So it goes for my characters Myrtle Hitchabocker from my chapter book Elsewhereville and Lula from the picture book Lula The Leprechaun.

I’ve got a lot planned for 2022. Besides Elsewhereville and Lula, I’m proud to be working again with Janeen Payne (from Too Many Poodles) on picture book, You Can’t Ride A Cat, and with Phoebe Shuttleworth on an anime-influenced picture book titled Alligator’s Baby Teeth. Whatever 2022 brings my way I’m stronger now because in the lull I’ve managed to restore, regroup, rebrand and rebuild.

Nerfnerd is the hero’s journey for a gray mouse sock puppet. Nerfnerd thinks he has a terrible life but when he’s tossed in the clothes hamper he discovers, with help from his newfound friends, that his life is truly rich and meaningful. (Headline Kids, 2011)

The story behind the story…When I was a child I was gifted a mouse puppet by a lady in our church. I named the puppet Nerfnerd because I liked the way the syllables felt flowing out of my mouth when I said the name.
In 2008 I had an idea for a story about my childhood toy and the tale took shape. I was feeling a little sorry for myself at the time and Nerfnerd was a great way to remind me of all the things in my life I had to be grateful for, including my beautiful daughter, Millena.

Lost in La La Land is the account of two bumbling sailors, Professor Parringblue and Sir Tibbs McFiggley, who start out on an adventure looking for mermaids and sea sprites. Along the way they get lost and discover La La Land, a zany island filled with cartwheeling bread people and chocolate animals.
The two sailors realize this is the place for them. (Uncle Dave’s Books, 2014) 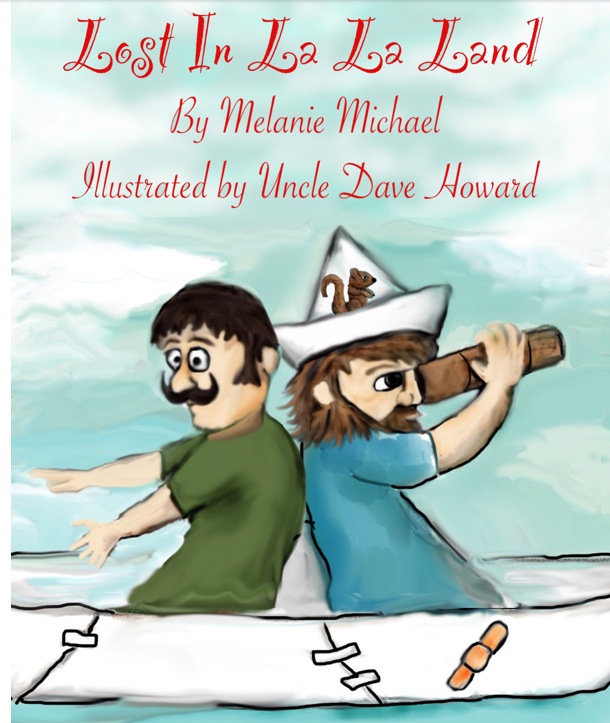 The story behind the story…I’ve always enjoyed rhyming and s t r e t c h i n g  my imagination as far as I possibly can. This story came to me one night at two o’clock in the morning. It’s a fun rhyme that reminded me that there doesn’t always have to be a moral to a story. Sometimes a story is written out of sheer joy— just for the fun of it.

Billy Beakhorn and the Booger Man is a tale about a boy who wipes his shirt on his nose and brings the Booger Man to life. The devious Booger Man makes the whole town sick. Can Billy stand up to the mess he’s created and put the Booger Man back in his place?
This is a boogers-gone-bad story about kindness and setting wrongs right. (Uncle Dave’s Books, 2016)

The story behind the story…When I was small my Grandmother, Hazel Shroyer, would say, “Watch out for the booger man!” This was even more terrifying to me than the “boogie man”, because it wasn’t just a scary man. It was a scary man covered in snot.
One day I was telling my publisher, Dave Howard, about this and Billy Beakhorn and The Booger Man was born. The name comes from three words for nose (bill, beak and horn) and for my Uncle Bill. I wanted the book to have a lesson about kindness and doing what’s right even when it’s not easy, because those are lessons my grandmother taught me early on.

A One of a Kind Hot Air Balloon Adventure is a story about two children left alone by their uncle on a hot air balloon ride. In no time they are in trouble, but an amusing cast of characters come to the rescue including a little girl and her puppy, 27 monkeys, and even the man in the moon. (Uncle Dave’s Books, 2017)

The story behind the story…One of my favorite books when I was a kid was about two people who make a sandwich. They keep adding more and more pickles, ham and cheese until the sandwich is so H U G E  that they can’t eat it. A One of a Kind Hot Air Balloon Adventure reminds me of that book.
The two children get caught on an unexpected hot air balloon ride and as more and more people and animals try to help, the story grows more and more ridiculous. I love this book because everyone wants to help.

The story behind the story…This is truly a “write what you know” kind of book. Each night when we lie down to sleep my husband, Roger, and I have to make room for our three poodles. They are miniature poodles, but they really take up the s p a c e  of three standard poodles (maybe it just seems like that to us).
One night I yelled, “Get off the bed and on the floor. No more poodles. No! No more!” Once you’ve said something like that…well, you have to write a book about it.